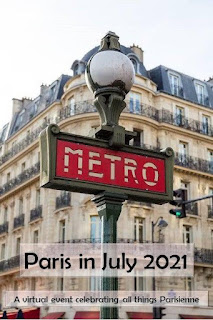 We've reach the final station on our Paris in July 2021 journey. One last week, or half a week... But who says it all has to stop here.. there's always more books, films, recipes, artists and memories to review and share.

In the past week we've been through a few stations along the metro of Paris - we went to the Cafe du Dome, walking through the flea markets in the streets of Paris, we stopped for a French dinner out of the camper and of course, the mandatory visit to Shakespeare and Co. We've also learned more about Anais Ninn, what French books you can read in one sitting, and the Wondrous Words: Coup de Foudre, or special moments that feel like a lightening strike. I have to thank Mel U and NancyElin for their prolific reading and reviews of French literature, and books about Paris and France.

So here we are, almost at the end of the line, and we all have that sinking feeling - it cant be over yet. But yes, Paris in July is about celebrating all things Paris and French during July. I know myself, I had hoped to do a few more posts before the end of the month, but I may be continuing into August, and maybe even a return to Paris later in the year to wind up the trip...

My quote this week comes from a large book I have in my library (now known as the home home office) which I flick through from time to time - French Essence: Ambience, Beauty and Style in Provence by Vicki Archer.

There is a certain something about the French and the style in which they live that creates a unique ambience. Their success lies in the inherent ability to blend all the senses, which makes for a life that is filled with emotion and a life in which the sense are forever stimulated. Ambiance permeates every aspect of French life, whether it be in private spaces or public places.

I love your French Essence photo. It's been a good July. No entry this week but I'll start thinking about next year (there MUST be a next year!) Thanks for organizing this once again. I love this event.

Just managed to squeak in with a review on the last day of the month. Next year I hope to be better organised!