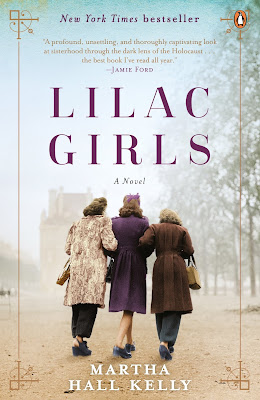 Last month I hosted Paris in July, and I was also swamped with work and other important commitments, so I didn't get the chance to do any of my own posts for Paris in July. So this month I will get a few done, starting with this review.

I took the recommendation to read this from  a list of books for reading during Paris in July published by Mel U at the Reading Life, I'm glad I did, although it's not an easy book to read. A couple of reasons why it wasnt a easy book for me to read.

Firstly, the book tells the story of three different women, which means each chapter is told by each women in turns. I find that style of narration difficult to get engaged with. It took me more than half way through before I was interested enough to finish.

Secondly, the book is based on real life events occuring in Poland, Germany and New York in 1939 when Hitler was invading France & Poland. Thats not an easy subject to read about. Life in Ravenbruck, a women's re-education camp, the only one in Germany.

Thirdly, is was a story about a young female german doctor, who in a time of war, takes a job in the women's re-education camp believing she was doing the right thing for her country. However, she ends up being forced to do unimaginable things. Things that will haunt her for the rest of her days.

But despite being difficult to read, it was in the end, a story of resilience, women's strength and community. Through out, I was distracted by the New York Socialite, Caroline, storyline. But in the end, she was the angel of grace. What was even more inspirational, was that Caroline was one of the real women. After the war, she lead a beautiful movement to help the women who were harmed during the war.

Thanks Mel U for the recommendation.

When July comes to an end theres a sense of disappointment in the air, a sense of loss, as Paris in July,  the blogging event, comes to a close. Yet, as it is well known in this community........ Paris is always a good idea! The event, with its Mr Linkys, with the buttons, the challenge to honour all things Parisian or French, may end, but we can still read, eat, drink, watch, enjoy & review these things... and i hope we will.

This year we had a collection of different buttons to help us mark our posts, as a reflection of the different members of our community this year. Its the diversity of the participants that I love about blogging events. We come from all walks of life & yet in blogging, in July,  we come together to share our appreciation for the old, current & emerging culture of Paris.

Thankyou all, for sharing your holiday memories, your experiences, the books you read, the movies you watched,  the french food & festivities you celebrated, the recipes, the history, the polotics.... childrens stories, book titles, book covers, things you collect, exhibitions you went to, and parks you spent Time in.  All of these posts, all of your contributions, they are Paris in July!  We did it together .