The girls we taught in 2007, now at High School 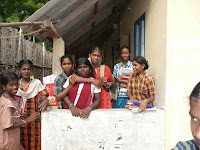 In September and October this year my friend and I went to Tamil Nadu to volunteer as english teachers and to work with a small NGO, ODAM. The Organisation of Development, Action and Maintenance envisions "Establishing equality among human society" irrespective of caste, creed, gender, region, religion, language or politics. To translate this vision into action, ODAM works on issues such as: rural poverty, women's empowerment, child welfare and environment.
Why did we go? This was our second trip becuase after our first one we felt committed to returning to demonstrate a human connection and to see our girls growing up. But the first time we went was a matter of opportunity. After more that 15 years working for the Government I had long service leave and my plans then included traveling. I had 6 weeks in my program to fill in and volunteering somewhere in India made sense - it would be a cheap 6 weeks, and give me an opportunity to try something different. I don't have children, and my husband doesn't get as many holidays as I do - so it makes sense for me to give my time through volunteering. Volunteering allows me to share my skills and knowledge with an organisation that may be poor on human resources. It also provides me an excellent opportunity for personal and professional learning. At the moment, I am committed to volunteering as a learning experience instead of enrolling in my PhD which would demand me to compromise some of my values.

How did I choose ODAM? There are many hundreds of agencies that happily take volunteers. There are also many who charge you for the experience. Many others work towards their own set of values and beliefs. Finding an agency or opportunity that was affordable, and fitted well with my own beliefs were two of my main selection criteria. I wanted to work towards the empowerment of women and against violence, I didn't want to be involved in 'pushing' organisation values or religious beliefs on anyone I would be working with, and I wanted to learn about a new culture. Finding ODAM (on Idealist) was the answer. In early correspondence with the volunteer coordinator at ODAM I asked lots of questions about what work they do and how they could use me. I appreciated the way they responded, and my friend and I eventually agreed we could go as English teachers. 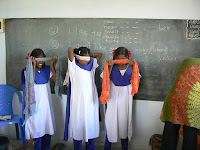 Would I do it again? I'd definitely volunteer again. And I'll promote ODAM to anyone who will listen.

This is just the first of my reflections on volunteering. I will post more soon about my experiences in India, the challenges and lessons I learnt and how it changed me.

Girls playing the senses game.
Posted by Tamara at 2:20 PM No comments:

Catching Up on Book Reviews

As promised, I've returned to review (briefly) a few of the books I've read over the past few months. Some of these have been light and easy going reads, while others where a little more challenging. I'm reviewing from most recently read to those read a while ago. So I just finished these 2 yesterday while recouping from a medical procedure.

The Distance Between Us, by Bart Yates. This was reviewed at ebooks as a 'gem' and attracted me because I like to see how authors can write about the real experiences of life. I'm also a lover of classical music.

The story is about the family of Hester Parker, a classical concert pianist, whose career was cut short due to an accident, closely followed by the children. Two of the children have inherited the gift of music, while the 3rd child struggles with her inability to match her brothers or mothers standards.

It's a powerful story of a family that unravels after the suicide of the middle child. The author captures the readers, with his ability to express the emotions - especially of the mother - of their grief, turmoil and pains.

While a main character in the story, the young gay tenant in Hesters home, Alex is the gentle presence that carries Hester through one of her most difficult times, as she faces the loss of her husband, eldest son and her home.

I enjoyed this read - although it reminded me, sadly, of my own family dynamics.

Very Valentine, by Adriana Trigiani, was a fun light read (just what the doctor ordered yesterday). The story, a 33 yr old woman, finally deciding on her lifes' vocation - shoe making - is faced with the challenges of a failing family business and failing love life. Somehow she brings both her lifes desires into perspective and the story has a happy ending.

My favourite parts included the tomato garden on the roof top of their Manhattan factory/home, the walks along the Hudson River with her man, her grandmothers love affair, and the ultimate - her trip to Italy, with all it's highlights of shoes, fashion, fancy hotels, discoveries, boat rides to secret bays, and the kiss.

This book engaged me, and kept me captured until the end.

How to Paint a Dead Man, by Sarah Hall. I like what the back cover says: 'Sarah Halls' writing is powerful as well as delicate, and How to Paint a Dead Man affords the deepest pleasures fiction has to offer, She weaves together the four stands of the story with supreme conviction, beauty and emotional intelligence.'

There are four stories - the famous artist of the 1960's, Signor Giorgio, who tells his story from journal entries - the Scottish landscape artist, Peter Caldicutt, whose story unfolds with crazy antics demonstrating the egocentric flaws of a passionate man - the blind but fragile & young flower seller, Annette Tambroni, whose story is one of her mothers eternal protection and catholic paranoia, and her discoveries of the world around her - and finally, the daughter of Peter Cadlicutt, Suzi, who is struggling with the her own extreme grief of having lost her twin brother.

I loved all four story lines, although it took me a while to join the dots. Once I did join the dots, and the time line, I was able to see that Sarah Hall had indeed weaved the story. My favourite aspects of the story included the reflections of Giorgio, as told through his journals, his wisdom and his age and also the confusion of Suzi's grief and her drug of choice, a sexual affair. I found Peter Caldicutts story a little too close to home - as his antics reflected those of my father - also a creative force that survived the 70's...Those chapters were aptly titled 'the fool on the hill'.

Brida, by Paulo Coelho, was my first Coelho novel, and I doubt it will be my last. I picked it up while volunteering in India, out of the common room library, and once I started I couldn't put it down. I read this as part of my Lost in Translation Challenge 2009.

Now it's a while ago - so, from memory, the story's about a young woman who's searching for her calling in life and finds her path through a collection of individuals who teach her and mentor her.

Mouthsut.com (like other bloggers I've looked up) doesn't reveal much, but says 'The conflict within all of us to be with someone whom we have known since long [before], or to be with someone whom we have known for a lesser time but who touches our heart more, or to just leave everything and submit ourselves to a lone path with no partner, forms the crux of this story. There are not too many sub-plots but the ones which are there (hint - voices, previous life) are short and will bring back you to the story very quickly.'

I was definitely captivated by the story line, and found many connections between Brida's challenges and my own - especially as I was in the midst of a alternative experience, living in India, surrounded by alternative spiritual paths and far from my family.

Considering this as a part of my Lost in Translation challenge, I loved Coelho's writing, which obviously translated well into English (and apparently 65 other languages). In reading other reviews about this work in translation, I am obviously no alone in my position.
Posted by Tamara at 8:54 AM 2 comments:

Today has been probably the first day since returning from India, that I've been about to get out to the garden and enjoy being covered in dirt. It's been gorgeous. Today's been pretty rainy, but that was great weather for my job - weeding and turning. While I was away, my partner efficiently kept the broccoli and spinach going by eating it regularly. But didn't effectively manage the over growth of the older and spreading plants. So today I had the fun of pulling huge old celery bushes, and pruning the wandering native spinach, and tossing the old broccoli bushes to the compost. The compost is now HUGE.

While in the garden I found self sown lettuces, radishes, fruiting strawberries, hidden bok choy, and forgotten onions. It's such fun bringing in the produce - today's pickings include
Since pulling up the old stuff, I can now see what space I have to work with, and can start planning my next round of planting. Maybe next weekend will be a good time to start on that!

While out in the garden my ponderings wandered - but here's a snippet:
Finally, I had a quick reflection of my blog and noticed it's been quite a while since I shared with you a tea cup. This little one joined my collection from Limoges in France. I love fine china, but when I was in Limoges I was riding my bike. So collecting some nice everyday pieces wasn't going to be easy. I found this little one and just love it. 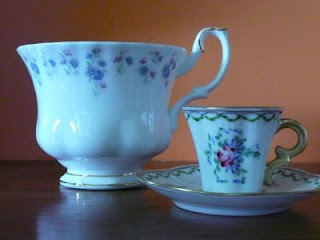 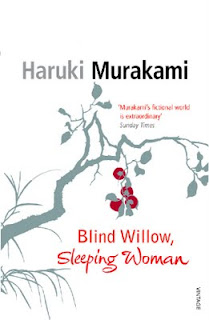 Again, Murakami has intrigued me and challenged me in new ways. Once I got into this book, I did find it difficult to put down. I was intrigued from the first time I saw the cover - it's just so beautiful and elegant - which are words I'd use to describe some of Murakami's short stories included in this work.

I started collecting Murakami novels during the Japanese Literature Challenge 2, hosted by Della Belleza. It's since waited on the shelf for this years JLC3, but didn't have to wait long before I picked it up.

The back cover says 'Here are animated crows, a criminal monkey, an ice man, as well as the dreams that shape us and the things we might wish for.....Murakami's characters confront loss, or sexuality, or the glow of a firefly, or the impossible distance between those who ought to be closest of all.' For me, this collection of short stories were a powerful reminder of the things (real or imagined or hoped) that I've lost, and the meaning these experience are given (or not) in my life.

Just a couple of reflections:
I cant tell you which short story was my favourite, they were all pretty deep and challenging. I did limit myself to one short story a day, to allow myself time to process the significance and also the stupidity of some of the stories. Imagine vomiting for 40 days, every day trying to locate the reason and considering the conspiracy theories, only for it the end suddenly, and not to ask 'what did I learn from this?' When Murakami asked his friend (who had suffered all this) this question all he got in response what 'how should I know?'.
Posted by Tamara at 10:43 AM 2 comments: