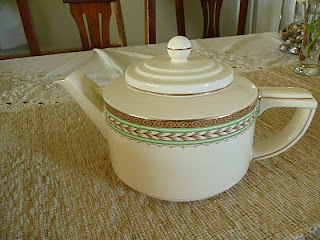 One of my very favourite finds from an antique fair.

I have been reflecting on my blog, what it means to me and why I do it - mostly because I'm not attracted to it at the moment. So I've decided to make it a place I do want to visit. My new resolutions include
So this blog is about Tea.

For as long as I remember I've been a lover of tea, but I think the defining moment for me was when I was about 25yrs old and on a trip to the UK with my husband, I couldn't help finding teapots I wanted to bring back to Australia - I just fell in love with the English teapots and all things tea-ish. I've reflected on this a lot, and for me, that was a self defining time - trying to redefine myself in my new career (3 years out of Uni), as a new wife, and as an individual adult living away from my parents. Teapots are mature, feminine and elegant. Not a bad role model... Well obviously since then, I've taken a broader interest in the world of Tea, but its teapots that retain my interest.

So I've been looking for new tea blogs to follow. I've found some new sites but would welcome any other recommendations...

I like to translate Cha Xi with tea play. 'Xi' has is the same as a theatrical performance and it's something we do to enjoy. We play and we tell a story. The plot is the tea: each brew tells us something. Fragrances can disappear as quickly as the sound of a word, but the tastes can linger on as the deeper meaning of the story.

Welcome to the Isnai-TEA blog! Have you ever wondered what all the fuss over tea is about? Well, here's your chance to find out! On this blog we're going to be exploring every nook and cranny of the wide world of tea, so buckle up and get ready for an Odyssey of Insani-TEA!

My interest is in creating beautiful teas that are a contribution in a small way to your day; and in enjoying great relationships along the way.

I look forward to your recommendations....
Posted by Tamara at 8:24 PM 1 comment: 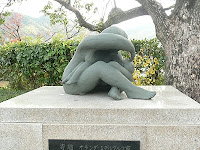 Mother protecting child - this statue is found in the Nagasaki Peace Park, Japan. It speaks to me about anguish, pain and fear, and reminds me to believe in peace, justice and humanity.

1. Chicken and Champagne -- the best food to take on a picnic.
2. Summer is for sunsets by the lake, walks on the beach, playing in the garden and Christmas..
3. Aussies call them thongs, others call them flip flops.
4. To love someone is sometimes painful.
5. There's nothing like the freedom of eating chocolate (guilt free) while on a long hike.
6. When I crave food, it's usually white - mash potato, cheese, toast, chips.
7. And as for the weekend, tonight I'm looking forward to dinner with friends, tomorrow my plans include coffee with a friend from out of town researching tea blogsites and cooking, and Sunday, I want to sleep in then go to the movies (get out of the rain)! 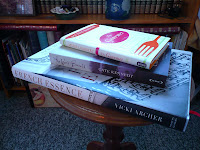 After struggling for some time (most of this year) to find inspiration for reading, had a lovely time visiting one of our local independent bookshops this week. I've come home with three new books - each covering off one of my passions.

FRENCH ESSENCE - by Vicki Archer, is a gorgeous picture book of all things lovely about french life. Here are just some of the pictures that I fell in love with... 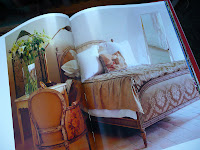 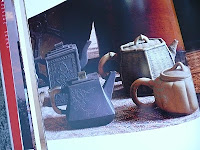 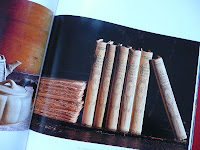 I also picked up a copy of Muriel Barbery's 'The Gourmet'. Last year I read 'The Elegance of the Hedgehog' during the 'Lost in Translation' challenge. Paris Match has said this novel is 'An ode to the pleasure of good food... mouth watering from beginning to end'. Who couldn't love that. It's also been reported to be 'totally French yet completely universal'. So I'm looking forward to getting to pick this up.. in the meantime the cover is lovely to look at.

My last purchase was Cate Kennedy's 'The World Beneath'. This is an Australian novel, covering one of the most significant environmental moments in Australia's recent years - the Franklin Blockade. It's the story of a couple, who met at through the Blockade, and their daughter. This story reflects my life, as I am the daughter of such Hippies, lobbyists and world changers... I'm really enjoying this story. The author has captured me through her characters, but also in the moment in time the story unfolds in. 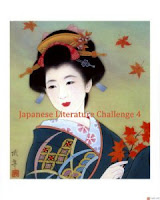 Finally, I fell in love with this beautiful card... Thought about sending to a friend, but haven't yet let go of it... 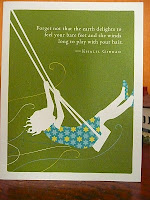 Forget not that the earth delights to feel your bare feet ad the winds long to play with your hair....... go out to play! 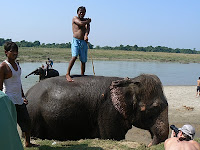 1. Friday never fails to make me smile. (Thanks to gotart4u for that)
2. I'm looking forward to le tour de france 2011, where I'm going to be!
3. Camille is what I'm listening to right now.
4. Potato salad must have onion in it!
5. Zucchini and feta fritters followed by a chai was the best thing I ate today.
6. Today was Friday 21st May, and anniversary of the former Indian prime minister Rajiv Gandhi is assassinated by a female suicide bomber near Madras in 1991.
7. And as for the weekend, tonight I'm looking forward to wine and cheese, tomorrow my plans include house work, french homework and cooking, and Sunday, I want to go out for lunch, and see some friends!

See Friday Fill-ins for more links...
Posted by Tamara at 7:11 AM 4 comments:

This weekend we have been celebrating la vie de francaise at the French Film Festival hosted by Alliance Francaise. My friend and I had tickets to see three movies, and I can say now, each one was very different.

Comme les autres (Baby Love) was about a gay pediatrician in his forties who wanted to adopt a baby and bring it up with his lawyer partner. The story unfolded the complications of relationships, the values and morals of society, and the hopes and dreams of men who want to be dads. I enjoyed this movie alot, never quite sure what the end was going to be like. I thought the ending left a little to be desired, but essentially, I liked the feel good story of dreams come true.

La Fille de Monaco (the girl from Monaco) was a light hearted film with no real purpose but to entertain. It's about an uptight lawyer who meets a sexy celebrity while visiting Monaco for a trial. He discovers a world he's never known, and the deeper he goes, the deeper he falls. The lawyers assigned body guard (the Obama look alike) went beyond the call of duty to aid the lawyer, but in the end, I think the bodyguard won. The end of this movie left me with a feeling of being entertained, but unable to explain why.

Les Bureaux de Dieu (God's Offices) was reported to be a comedy-drama, based on true case histories set in a Parisian family planning clinic. Perhaps my french was not fined tuned enough to find the 'comedy', however this movies was very engaging. Tackling subject matter normally excluded from public debate, this movie managed to ruffle feathers when released in France, I doubt it will be released more widely in Australia. Pictured here, the clinic Dr is explaining to the clients how a condom should be used. Other stories included the 40 yr old prostitute who seems to fall pregnant by the same guy frequently, but has many other clients, and the married woman who doesn't know if the babies her husbands or not. The side line story of the student counsellors learning the ropes was of interest to me (remembering my own student experiences) but these days, prompted me to think about something I could do in Paris..

Each year the numbers at the festival are increasing, which is exciting for our regional centre. The opening night was catered with local wines and Imported French Fromage, which I must say, was just one of the highlights of the festival for me. Another highlight, was being part of a community that celebrates what the French have to offer. 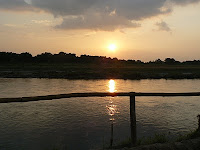 Chitwan River, Nepal
For more on info visit Friday Fill-ins
1. I just had a cuppa on the back veranda.
2. Heaven is.
3. The third sentence on the 7th page of the book I'm reading: Afterward, I'll spend a few days in Madrid and then return to Brazil. (The Pilgrimage, Paulo Coelho).
4. Prawns and champagne by the water with good friends tickles my fancy.
5. I was walking this morning as the sun was rising and the wind was dying down.
6. My french accent makes me laugh!
7. And as for the weekend, tonight I'm looking forward to the French Film Festival opening night, tomorrow my plans include French Films and Brunch with a friend, and Sunday, I want to garden, cook and read.

Today was mothers day and I felt along way away from my mum, so I bought some her smells to my home and baked one of her favourite deserts - pumpkin pie. I was then inspired by Dolce Belleza to blog about this because she also cooked one her mothers recipes. While I was cooking I was blogging, and listening to french radio streaming from my internet. I came across some french blog sites I will keep in touch with, including Sophie at Les Lectures de Sophie.
Later in the day I had the chance to Skype with my mum, and show her the pumpkin pie I made and take her for a walk around my garden - with my new wireless internet and laptop. It was special to be able to do that today.
On the garden front - all is good - pumpkins are ready to pick, banana's are ripening, spinach is eadible and plentiful, carrots, celery, lemons, manderines, grapefruit and guava all coming in by the baskets!
Posted by Tamara at 7:05 PM 3 comments: 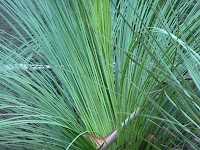 I've been wanting to do Friday Fill-ins for a while but couldn't seem to get it done on Friday... so I've decided to do it on Saturdays. you can see more info at Friday Fill-ins