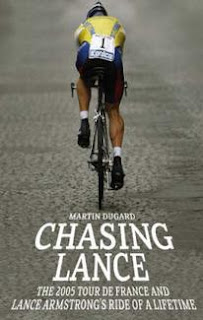 I've been reading about the Tour De France with great anticipation of my own special experience of the race. While I'm not a huge fan of Lance, he has demonstrated a commitment and perseverance to achieve his goals that I admire in anyone. However, this book is much more about Le Tour, than it is about Lance.

In July 2005, over twenty million spectators flocked to France to see if anyone could beat Lance Armstrong in the Tour de France. Among them were hundreds of thousands .......of men.... who see the Tour as the ultimate buddy getaway, a jaunt replete with fine wines, delicious meals and lazy mornings under the Provencal sun. There were also huge clumps of Germans, Spaniards, Italians, Dutch ......a mini-UN that packed the fields and small towns along the way, showing how one can be drunk in 13 different languages. A unique combination of travelogue, humour and insider cycling critique (complete with interviews and insights from Armstrong), CHASING LANCE will be the only book to bring into focus the entire Tour experience. [from here]

For me, July 2011, I'm joining a tour group that provides us with the options of riding certain parts of the route each day, and then the chance to watch the world's elite male cyclists on the roads of France & Italy. This book has provided some valuable insight into the tactics of the pelaton, teams and individuals. It's be teaching me about how time trials work, what happens at the beginning and end of the race each day, and what I can expect when I get there.

A great fun read - distracting me from the news at the moment. Soon, I'm going to read Half the Sky: How to change the world by Kristof & Wudunn. Perhaps you could join me....
Posted by Tamara at 11:34 AM 2 comments:

Thoughts in Progress on being Vegan 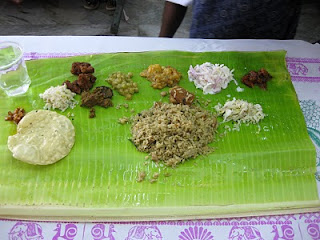 Typical vegitarian wedding meal - Tamil Nadu
While living in India I became acustomed to a largely vegitarian diet, not strictly vegan as they used eggs and milk products. However, last year when resting at a Vegan Retreat, I enjoyed learning more about the vegan diet and the choices people make. Since then I've found interesting articles that have captured my attention. I thought it might be a good time to ponder..

The New Internationalist recently published a debate on 'is being Vegan the green option?'. I guess this got me thinking again about the choices we make and why? Would I choose to be 100% vegan for environmental reasons, health reasons, ethical reasons or would I do it as a result of a logical cost benefit analysis that took into account all those reasons?

I'm not vegan, not even vegitarian, but Im not a daily consumer of meat, dairy and other animal products - perhaps I'm hybrid? However, it is important to me to be considerate and conscious about the decisions I make.

The NI article, focusing on the green aspects of veganism, highlighted for me the importance of knowing more about the food you eat. What is 'free-range'? what does it mean to order the 'grain fed beef/lamb'? should we eat farmed salmon or Atlantic salmon? Where is the soy grown and is it organic and farmed ethically? what about those chick peas? The questions could go on. I wasn't convinced by Bruce Friedrichs argument in the NI article, and I think I lean towards Wayne Roberts point - that there's a different answer for different geographical area's, for different individuals and at different times of the year...

People choose to be vegan for many reasons, but generally its for health reasons, ethical reasons (animal rights), spiritual or environmental reasons. My current thinking is that
So, it's a journey - I still want to know more about what it costs to grow, process and use soy and what the health impacts of a soy based diet are. I'm interested also in ethical dairy production, and the health benefits or impacts of a diary based diet. I'd also like to know other people's thoughts about honey? is this an animal product and do Vegans eat honey? I'd love to hear from you.... any thoughts at all.
Posted by Tamara at 11:18 AM 3 comments: 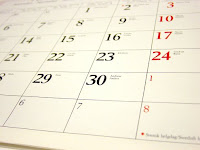 Things I want to blog about soon:
I will be away on work a bit - so maybe there'll be time to post all this soon...

Give Away - The Permaculture Calendar I offered a week ago will be going to Julie at Towards Sustainability....
Posted by Tamara at 11:08 AM 4 comments: 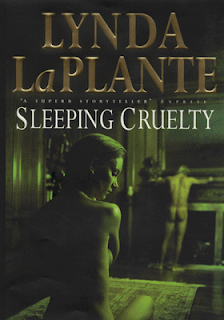 Book Review: Looking for some quick wins in the reading world, I picked this up from a girlfriends shelf - she's got 3 full shelves of female authors of crime fiction... always a good stop over. I've been away in Hobart this week for work, and it's always good to have a book that you know you will enjoy - nothing worse than carrying a book you don't want to read. Anyway, Sleeping Cruelty was just what I was after.

Lynda La Plante is well known for her crime novels and TV shows - most famously, Prime Suspect. She typically tells the story of a strong female character, usually a detective or police office, and intertwines the themes of gender discrimination & disadvantage, work place politics, and links the story with some element of current affairs or reality.

This story however, appears to have taken a different twist. Her lead character is a typical wealthy tycoon who decides to take revenge on the media who tried to bring him undone, associating him with the death of a well known gay politician who committed suicide as a result of lost love.

Sir William Benedict is enjoying all the glittering prizes that his wealth and position have granted him. Relishing his reputation as a self-made man (with his own island in the Caribbean), he is particularly keen that his political protégé Andrew Maynard should succeed, and he has been bankrolling Maynard's campaign heavily. But Maynard, who was gay, commits suicide, and Benedict soon finds his reputation falling apart as swiftly as his ordered world......

In such books as The Legacy, Bella Mafia and Cold Blood, La Plante demonstrated a sure grasp in her delineation of larger-than-life characters. But she has replaced her powerful female protagonists with a richly drawn anti-hero in Benedict. The details of his lifestyle and the cold-blooded betrayals by his nearest and dearest are handled in the usual confident fashion, but it's the characterisation of Benedict that really grips the attention. Initial fears that that he may be a broadly-drawn, one-dimensional creation are quickly allayed, and the reader is cast adrift when La Plante pulls off her principal coup: thoroughly involving us in Benedict's highly dubious activities. --Barry Forshaw..... [good read review]

I really enjoyed this - But a word of warning - when I found myself sitting between a 12 year old boy and my 59 yr conservative male colleague on a plane - I realised this novel contains some sexually explicit material. Of course I didn't mind that, but I was nervous about my travel companions eyes wandering..
Posted by Tamara at 10:48 AM 1 comment: