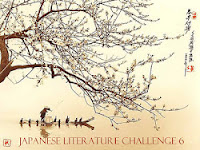 Thank you Bellezza, you've challenged me, and I feel happy to have achieved. For people who visit me regularly, you will know that I've had some challenges getting into reading in the past year. I am happy to say I've finished a book, and even happier to say, it was one from the Japanese Literature Challenge hosted by Bellezza. 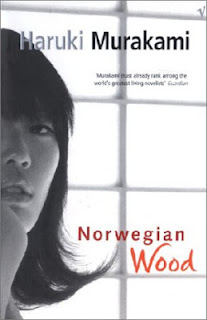 I've just finished Norwegian Wood, by Huruki Murakami. I've really enjoyed most of Murakami's works, but half way through this one I was beginning to wonder..... friends told me to stop struggling, 'its only a book', but I'm happy now I've finished it. It's taken me a few days, but I've been processing my thoughts and feel like it makes sense now.
This book has no surrealism in it - well I didn't think so - and i think that's what i was looking for. Despite not being Murakami's usual bizarre story line (no missing sheep, talking crows etc), this story could've been an autobiography (but i don't think it was).
This review outlines the story really well, which is essentially the story of a young man in his early 20s growing up, during his university days. His best friend suicided, another friend died also, one girlfriend also suicided, and his other friend was having relationship issues. He eventually fell in love with a fun loving girl who's dad died...
So death was covered (alot), as were morals - sleeping with many women while in an existing relationship, sleeping with a much older women, how to relate to people with mental health issues. Murakami also asked questions about 'what is normal?' 'what is success?' and 'what is commitment?'.
There's alot of waffle in this book that I don't think was necessary - but given that it's one of his earlier works (I think) it kind of makes sense that his later works appear to be more judicious about the describing passages. I didn't need all the sexual encounters explained to me in detail, but it seems that the protagonist liked the fact that he related well with women, and sex seemed to him a natural part of those relationships.
Why is it called Norwegian Wood? It appears that its based on the Beatles song, but it's secondary meaning may be linked with the feeling that the protagonist was lost in a wood...
Here's the quote I like the most


"Death exists, not as a opposite  but as a part of life". By living our lives, we nurture death. True as this might be, it was only one of the truths we had to learn. What I learned from Naoko's death was this: no truth can cure the sadness we feel from loosing a loved one. No truth, no sincerity, no strength, no kindness, can cure that sorrow. All we can do is see that sadness through to the end and learn something from it, but what we learn will be no help in facing the next sadness that comes to us without warning." (p361)