After the reality of the atomic bomb in Nagasaki (my last book), I needed something fictional. I've always enjoyed Jodi's writing, and her books are good for reading on the trains (I do 2x 1 hour trips a day). I wasn't sure if I was ready for this one though. While fictional, the reality of family dynamics cant be overlooked. Yet, once I picked up this book I couldn't put it down.

There is so much in this story I connected with its hard to know where to start to reflect. Sisterhood is an amazing gift is in 1000's of ways, but perhaps the greatest pains in life are those we share with our sisters. Anna and Kate's story is a powerful picture of dependency and interdependency, which is reflected also in Julie and Izzy's relationship, and again in Sara and Zanes. The differences in each of these relationships reminds us of all the important reasons we love our sisters. For me, right now, I will cherish my sisters, and the relationship my mother has with hers, for this is integral in my being.
Posted by Tamara at 7:03 PM No comments: 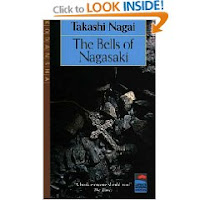 I chose to read this as part of the Japanese Reading Challenge because on my first and only visit to Japan, visiting Nagasaki was an immensely moving and life changing event. Growing up in Australia in the 70-80's was fun and carefree, mostly. If you are of this generation, you were probably not privy to an education about what happened in other countries, and especially not what happened in wars. I knew nothing about the bombs in Japan. In fact I'm rather embarrassed to say, when planning for the trip to Japan last year, I didn't even know about Nagasaki, and didn't realise that Hiroshima was in Japan. I am clearly on a new learning path.

One of my blogging friends has written a great summary of the book, so I dont feel the need to do that here. However, I do need to reflect on my experience of reading this story - a true story. 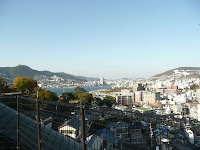 Nagasaki is now a large, beautiful city. You can see in this picture the mountains and river, as the author refers to in his description of events following the bombing. As I read his memories, I was able to picture so much of what he described - not only beacuse I have been there, but because he draws the picture so vividly. He talks about the unexpectedness of the bombing, his surprise when he discovered the atomic bomb had been invented and used, and his experiences as both victim of the bomb, and carer to other victims. 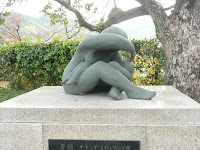 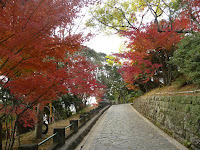 Nagasaki Peace Park is as an amazing place to visit, as this book is to read. They both describe the horror that occurred to the people of Nagasaki, Japan, and provide an insight into the amazing gracefulness of the Japanese People, who say - let this be a lesson to the world and an eternal request for Global Peace.

Nagai wrote: Men and women of the world, never again plan war! With this atomic bomb, war can only mean suicide for the human race. From this atomic wast the people of Nagasaki confront the world and cry out: Now more war! Let us follow the commandment of love and work together. the people of Nagasaki prostrate themselves before God and pray: Grant that Nagasaki may be the last atomic wilderness in the history of the world.... the Bells continue to ring.

May these prayers be heard.

Well, it's the glorious weekend again! This morning I strolled around the garden to observe what's been happening while I've been working this week. Lettuce is about to go to seed - time to get some new ones in for summer, snow peas are slowing down - time to feed them, celery is loving the current weather patterns, and the Peaches are starting to fruit. Last year we had two peaches off the tree, this year 100's. Where I live we have to take particular care to control fruit fly - which of course I try to do organically. This year I'm trying a new product that smells like Vegemite. Last year (with only two peaches) I was able to put a bag on each one and watch them grow safely.

Today's activities will include fruit fly spaying, weeding, fresh planting, and cooking up the new batches of gooseberries and rhubarb. But before I get out to the garden, I have coffee with a book-buddy at the local Borders Bookstore. We'll see what hits the reading list for the next month.
Posted by Tamara at 10:28 AM 1 comment:

I'm fantasizing about living in France one day. I have been learning french for four years, visited France several times, and when I can, I'll read about France. The title 'Chez Moi' was appealing to me - it's french!. The caption on the front was enticing: Chez Moi will give you cravings. you can't eat the book, but do read it. It's full of tasty pleasure and zero calories.

I wouldn't worry about the calories... the story of Myriam will help you burn calories. She frustrated me with her nurotic wanderings and mid-life crisis ponderings. There were no real descriptions of food to make my mouth water, and none of the 'tasty pleasures' promised on the cover.

Strangley enough - by the end of the book, I was engaged in Myriam's story, but then it ended all too soon. Did she wonder off with her ethnic lover, or stay in the restaraunt? I dont know. Read it if you're patient, or nurotic yourself.
Posted by Tamara at 1:34 PM 1 comment:

The Shack is a book about the character of God, about the relationship of the Trinity, and about one mans search for meaning. The main character is searching for the joy of life after loosing someone very special to him. Its a story that reflects many peoples life journey of pain, heart ache and loss. Accumulated pain affects us all, and for the main character of the book, he was struggling to see through the clouds. He was angry at God, confused, and wondering if there was a god at all. Through interaction with God, (best to read the book to get the full story), he gets to see God face to face, and rediscover the meaning of relationship with God. Many myths about the character of God are challenged in this story. While, disappointingly, I felt the story represented a very western view of God, I did appreciate that some of the common questions about the character of God were addressed. I thought the author was able to express his own vision of God through this very engaging story. Recommended for anyone who wonders about a God who intervenes.
Posted by Tamara at 5:05 PM No comments: 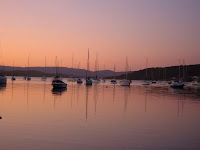 Our Lake, where we'll have breakfast this morning
We have a public holiday today, and my partner and I promised ourselves some time together and one of our favourite things, breakfast out. Sill as the spring-time rain falls, I was inspired to get up before him and take the time to meditate on the beauty around me. I love to listen to the magpies croon, the kookaburras laugh, and the flurry of birds through the neighborhood trees, as the rain brings a newness and stillness to this place. my dogs are curled up, snug in their beds, wondering why Im up and if they have to get up too - not yet. This is my time alone, to think, reflect, and enjoy my tea.
Posted by Tamara at 8:03 AM 1 comment:

I was captured with curiosity when I read about the Japanese Literature reading Challenge 2. Last year I had the great joy of traveling with my 17 yr old niece to Japan for the end of autumn and beginning of Winter. I was spell bound by the natural beauty of the country, and in awe of the amazing richness of culture and spirituality. Given my new found appreciation for the differences in the Japanese Culture, I thought reading some of the countries literature would be a new discovery. It has been so far.

Haruki Murakami has written a beautiful story that engaged my in an alternative world for a period of time. The cover says 'Murakumi, master of the surreal, returns with a stunning new novel, where familiar can become unfamiliar after midnight...'

Definitely surreal, having a sense of being in 2 different worlds at once - I felt strangely engaged in Mari's story, I guess knowing what it was like at 17yrs to want to stay away and spend the night at Denny's. I made sense of the strangeness of Eri's world by imagining a young gril who had been treated and laballed beautiful and shallow, as if noone expected anything from her, except her beauty, she didn't need to wake up.

Mari's personal struggle with her sisters long sleep was woven into issues of her grief for the lost love of her parents, her own loss of a part of her and maybe her knowing the pain her sister felt for not being someone else.

I was struggling to make sense of eri's transfer to the room/office space of Shirakawa, the perpetrator of violence towards women. My thinking was the Eri represented all women, being transported to that space to indicate that women have become objects to this man.

I enjoyed reading a novel with a great deal of depth, and one which I believe has several powerful messages threaded through it. Im definitely moving on to my second Japanese challenge!
Posted by Tamara at 3:16 PM 2 comments:

Sunday in the Kitchen 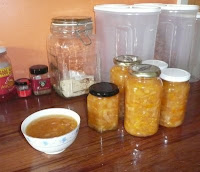 It's the weekend for spring cleaning, garden make-overs and cooking the excess produce. I'm having a ball, and at the same time I'm reliving the life of my mother, and her mother... My lemon tree has been very busy over winter, and while I've been sharing and giving away the produce, I still have plenty filling the fruit bowl. Today I've made up some marmalade, lemon butter and a lemon pudding for dinner. I've also stewed up my rhubarb, a made some more gooseberry jam. This morning we also had the great joy of tasting the first fruits off our new citrus tree's - a grapefruit and a sweet orange. Boy, this does feel like I'm acting out 'the good life' (a TV show my parents watched when I was sposed to be in bed!).

More on the organic front - I've been weeding out under the fruit tree's preparing to feed with blood'n'bone and mulch for the summer season, I've planted seeds for my next round of lettuce, cucmbers, spinach and beetroot. Hoping to have a basket full of organic and yummy foods for Christmas - which I've recently heard Im hosting this year!

My time in the garden was well spent this morning as I reflected and pondered on some articles I read recently in G-Magazine. I was interested in the article about Cork and the suggestion that the recent move to screw top wine bottles threatens cork forests as the demand for cork decreases the forests loose monetary value and are therefore threatened. The value of the forests is based in production of a physical product and not simply valued for their role in enviornmental cooling and CO2 use. What a shame that we can't value a tree for what it contributes to it's ecosystem.

I have been busy recently with life outside my garden which has allowed me time to read a few books on the trains. Reviews to come for my first completed book from the Japanese Literature challenge "After Dark", a Christian Novel 'The Shack', and my current book "Chez Moi".
Posted by Tamara at 2:49 PM No comments: