It can not be assumed that everyone who loves Paris and all things French knows and loves Antoine de Saint-Exupéry and his novella 'Le Petit Prince'...... but for those of us who do love the story, you would've loved this as much as I did.

Direct from a sell-out season in Paris, comes one of the world’s most loved stories transformed into an extraordinary live event.

I heard about this production by happenstance, and without hesitation I bought tickets for the Sydney Opera House. I live more than 2 hours form Sydney, but from time to time it's worth heading in to see the theatre at the Opera House, and this was well worth it. I took my sister too - but she'd never read the story or didn't know the history. So then I was inspired to do a little refresh on my history and share it here. 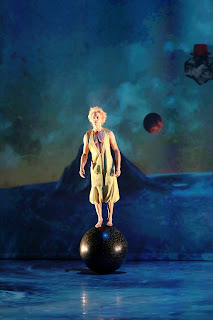 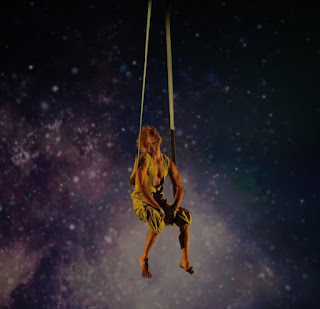 “What is essential is invisible to the eye, It is only with the heart that one can truly see” 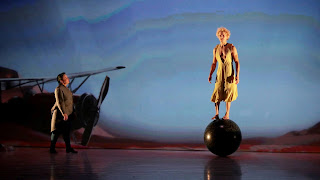 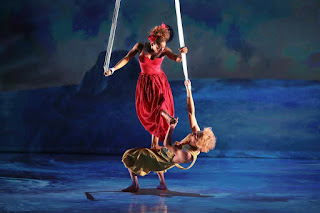 Apparently, The Little Prince remains the second most translated and one of the best sold books in the world. And, now, a stage production very well worth getting to see. It was a beautiful production, poetic and as mysterious as the novella. While the Little Prince was clearly the star of the show, the Rose (the beautiful dancer in red above) was just so stunning, and the narrator, with her genuine French accent, as thoroughly engaging and gorgeous.

Oh my, it was truly breath-taking, and a contemporary adaptation of the classic 1945 French novella  and a stunning spectacular of circus, dance, aerial acrobatics and ground-breaking video mapping technology. Digital light displays depicted travelling through space and strange new plants.

Another reviewer stated: The highly immersive, grand-scale performance, based on Antoine de Saint-Exupéry’s much loved 1943 children’s book, brings to life the cosmic world of an aviator lost in the desert who meets the Little Prince on his journey from one planet to another in search of a sheep. An omnipresent narrator accompanies the Little Prince as he meets many magnificent characters who communicate harmoniously through dance, gesture and movement.

Inspired by my evening out at the theatre, and the questions my sister and her family asked about the story, I have done some further research about Antoine de Saint-Exupéry and his flying history, which I will post next week. But for now, I'll leave you with this little clip I found....

A lovely story and it has been on my list for some time. I hope it will be available as an ebook at my library. A perfect time to read it. It must have been a lovely show. Always a bit extra when you love the story. Considering Saint-Exupéry's death he might have met the little prince by now. Looking forward to his life story next time.

Le Petit Prince was used in one of the elementary French courses that I took in college. It was so perfect: simple language, lots of fascinating things to talk about and ponder about. The stage production you described sounds wonderful. I loved the boa constrictor.

This looks completely magical. I'm so glad you told us about it and also shared a bit of video. I'd love to see this -- well worth the trip!

Oh, now I wish I had gone too! It looks wonderful.
I feel like I squandered my pre-lockdown life!! I should have been going to shows and to the art gallery, but I haven't really got back into the swing of things since the last lockdown!

I'm sorry you didnt get to see it. I hope it will come back.

We read the pop up book with my son (full text) a few years ago, a first time for all three of us. The performance looks incredible.