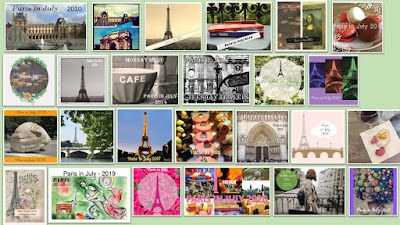 Paris in July botton collection since 2010
I have been inspired by several other bloggers who have posted recently about things they've posted in previous Paris in July seasons. I went back and reviewed the many different bottons we've used to celebrate Paris in July posts since 2010.  We've had a few... these have been design by me, and other co-hosts over the years,  and represent the things that we love about Paris.
I am promising to do the final Paris in July wrap up in a few days because i am currently away on a little trip with a girlfriend. But there's a connection to this post... i have strong memories (reinforced by stories from my parents) of travelling to Paris as a child in the late 60s. My dad thinks I fell in love with Paris when I was three..
Today my girlfriend found a treasure in a bric a brac shop. A silk scarf we think was worn by Qantas hostesses in the 60s 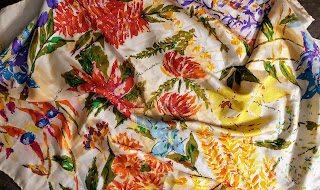 Beautifully decorated with Australian native flowers.
So,  inspired by this special find today, I thought I'd share this link to music I might have heard when I was in Paris when I was three... its just a bit of fun....
https://youtu.be/wsGt7vx_Ues
Posted by Tamara at 9:08 PM

It was a memorable months as always.