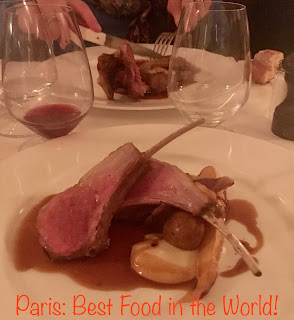 My friend Megan is an inspirational lady, with an amazing life story. One of her most admirable characteristics, despite being terribly generous, is her willingness to learn new things. She's designed and rebuilt her home, she's learnt chinese, studied law, she's an artist, as well as a senior executive in the public sector. She's been an outside observer of Paris in July for many years, (although she doesn't blog) but she's sat next to me on the train for years when I've been hosting.... Anyway, this year I've convinced her to share some thoughts as a guest blogger!
Thank you Megan.

Learning to cook French desserts
Over a quarter of a century ago I had the privilege of being taught to cook several desserts by a classically trained French chef.  Even now, I can see myself standing at the stove beside him as he helped me engage with food in a way I have never encountered.

Like most cooks, I’d become accustomed to the different smells of food, but this was an altogether more sensual experience. I had to use my sense of hearing, sight and touch to actually produce desserts using his recipes.  This whole-of-body experience was epitomised in his recipe book – there was no method, only a list of ingredients.  Crème anglaise, as it cooks goes from a swishing sound to a whooshing one and the movement of the wooden spoon makes deep crevices rather than surface lines. It’s only then you need to start checking if it is thick enough by drawing a line across the wooden spoon.  A sabayon needs to be whisked until your pointer finger can no longer stand to be in the water bath that the mixture is sitting in.

During that time a diner wrote to a food magazine requesting the recipe to a wonderful chocolate mousse cake we had on the menu.  As an untrained cook, I was pretty chuffed that someone had asked, but we could never provide the recipe as there was no way we could be certain that the diner could make it at home.  For this recipe my sight was the key measuring tool – Denis’ method required me to whisk the egg yolks and sugar until they came up to a dent on the side of a decades old mixing bowl.  On the off chance that one of the readers of this blog is that dis-satisfied diner, here is the recipe.  Oh, and its not a mousse cake any real sense of the word, it’s a flourless chocolate cake that is light (and gluten free) and has a moussey soft centre

Method
Grease a 26-28cm springform cake tin and line the base and sides with baking paper.
Preheat the oven to 150 Degrees C.
Melt the chocolate, butter vanilla and brandy in a bowl over a bain-marie of hot water.  Let it cool
Beat the egg yolks with 30g of the sugar until pale and the mix “ribbons” – which means little rivers of pale yolkiness sit on top of the mix before slowing sinking
Mix the cooled chocolate and yolks together.  The chocolate needs to be cool enough not to cook the yolks but must not have begun to set
Beat the egg whites with the 20gm sugar until soft peaks form – which means that when you lift up the whisk the tips of the egg whites curl over like the top of Mister Curly’s hat (aka Michael Leunig character)
Beat ¼ of the egg white mixture into the chocolate mix – use a large metal spoon and lift the mix up and let it fall softly back into the chocolate.
Now fold this lightened chocolate mix gently but thoroughly back into the remaining egg white mixture. A big balloon whisk is good for this
Pour the mixture into the prepared tin and bake for 50-60 minutes. It should remain slightly moist in the centre with a thin crustiness on the outside. Remove the ring and base. Leave it to cool completely. The cake will collapse a little.
It needs to be cut with a knife dipped in hot water, otherwise the moist centre will stick to your knife and pull the cake apart.
Serve with whipped cream and raspberries.

Oh my! That chocolate mousse cake sounds to die for! Thanks for a wonderful guest post on such a sweet subject! I might have to give this one a try!

That sounds delectable! I've never seen a cake like that in a French patisserie. I just looked at some French recipes for mousse cake, and they had a separate cake layer that did include flour, and a mousse that looked similar to this one. Interesting.

My mouth is watering just reading this! I love everything chocolate, and this sounds so very delicious.

I am a bit jealous of this woman. What a glorious thing it would be to be trained by a French chef to make desserts.