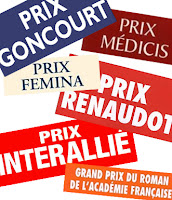 Did you know there are apparently over 200 literary prizes in France. I thought I would investigate literary prizes for those who like to read from the winners lists. If you're participating in Paris in July, you might like to consider finding something from the winners lists to look at. Although I haven't found this research easy. I started searching in english - but really only found the last year winners - so then I searched in french - but it didn't seem like I was uncovering what I wanted there either. So here's my best attempt.

le Prix Goncourt - this is one of Frances most important literary prizes. It's the one French writers covert. Winners get an amazing prize cheque of 10 euros! But with the prize comes status, media attention and royalties. First conceived in 1867 but started in 1903 by an editor who bequeathed a small group, a literary society of 10 members, the task of picking the winners.The prize goes to the best and most imaginative prose work for the year and aims to promote french writing. They have a category for Novels, Short stories, Poetry and Biographies.

Another prize is the Prix Femina : created in 1904 by the magazine now known as Femina, is decided year year by a female jury, although the authors don’t have to be women. It is awarded to the best novel published in France and is an alternative award to the Goncourt, which is unlikely to be given to women.
2011 – Dire son nom, Francisco Goldman
2010 – la vie est breve et le desir sans fin, Patrick Lapeyre
2009 – personne, Gwanaelle Aubry
2008 – ou on va, papa ?, Jean-Louis Fournier
2007 – Baisers de cinema, Erix Fottorino

How interesting. Thank you.

I definitely want to see what books are on some of those lists :) I love reading contemporary French lit.

I am not surprised at all. Maybe that's why they are such good writers. They are competing for a prize.

I would like to find more contemporary French literature especially after reading The Elegance of the Hedgehog and loving it!

I've tried to find information on French literary prizes before too, but had never thought about blogging about it, great idea. I'd love to read more French authors, and not just English language authors writing about Paris.

I didn't realize this, but I guess I shouldn't be surprised! There's a lot of talent in France!

BTW: it is actually L'art français de la guerre. Thanks