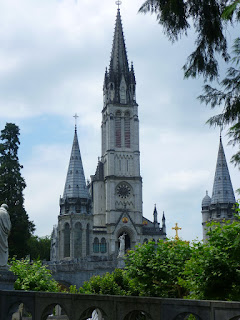 My visit to Lourdes was for the main purpose of watching the Tour de France and cycling some of Frances most beautiful countryside. However, there’s so much more to Lourdes than just its location. I took an afternoon to wander around the famous Catholic centre based around Le Grotte.

The Office de Tourisme Website provides this history of Lourdes;

The Gauls, Romans, Barbarians and Moors successively fortified the rock of Lourdes, Where the Château-Fort castle stands.

In the 17th century, Bigorre's unification with France (1607) meant that the citadel became less important.

It came through the French Revolution (1789) without too much damage, and Became an agreeable small town year in the 19th century. In the early 1850s, the castle was occupied by an infantry garrison. Back then, the town was just a stopping place for spa visitors, who were attracted by the water at Barèges, Cauterets, Luz-Saint-Sauveur and Bagneres de Bigorre. Lourdes was only the administrative center of a modest canton of inhabitants 4135.

Among them were Francois and Louise Soubirous, at Boly mill who lived for 10 years with their children, the eldest of whom was named Marie Bernard, also known as Bernadette (born on 7 January 1844).

In 1854, the Soubirous family became destitute when Francois lost eye during a work accident, and was accused of theft and put in prison, and the windmill went bankrupt. Eventually cholera killed 38 people in Lourdes. Bernadette, who suffered from cholera and tuberculosis, remained sensitive all her Life.

On 11 February 1858, Bernadette’s sister Toinette and a friend Jeanne Abadie, went to look for wood in a cellar, called Massabielle, set beside the Gave. While Toinette and Jeanne gathered wood, Bernadette heard a noise like a gust of wind. Lifting her head, she saw, in the hollow of a rock, a small lady, bathed in light, looking at her and smiling.

This was the first apparition of Mary, which would be followed by 17 more.

For Nearly 150 years, Lourdes has-been welcoming pilgrims and over 6 million visitors EACH year.

From April to October, Mass can be celebrated in all languages ​​at 22 places of worship. You can also expect big celebrations such as the International Mass, the Eucharistic procession in the afternoon and the torch procession bed Marian every evening.

From November to March, Many celebrations also take place Every day, such as mass, the Rosary, the Angelus ...

Fascinating. So, did you have a good spot for the riders in Lourdes?